Gabriel Harvey (c1545-1630) was a well known Elizabethan writer, lecturer, and critic. Born the son of a rope-maker in Saffron-Walden, near Cambridge, he gradually became something of a fixture at the University. In his youth Harvey knew the poet Edmund Spenser, and was loosely associated with the literary circle around Sir Philip Sidney. Harvey became Professor of Rhetoric at Cambridge in 1574. Harvey got in trouble in 1579 for his published correspondence with Spenser, in which he attacked the Earl of Oxford in verse. Later Harvey feuded with satirists Robert Greene and Thomas Nashe in a series of pamphlets which are remembered as the War of Words of the University Wits. After failing to receive advancement in his career, Harvey retired in 1598, and spent the next 33 years in his library studying Literature Science, and Medicine.

During Oxford’s youth Oxford apparently was on good terms with and gave financial assistance to Gabriel Harvey, a Cambridge Don. In 1578 the Queen visited Cambridge, accompanied by the whole Court. Harvey met the procession at Audley End, presented verses written in their honor.
The following address, in Latin, was presented to Lord Oxford (trans. by Ward).

An heroic address to [Oxford], concerning the combined utility and dignity of military affairs and of warlike exercises.

This is my welcome; this is how I have decided to bid All Hail!
to thee and to the other Nobles.
Thy splendid fame, great Earl, demands even more than in the case of others
the services of a poet possessing lofty eloquence.
Thy merit doth not creep along the ground,
nor can it be confined within the limits of a song.
It is a wonder which reaches as far as the heavenly orbs.
O great-hearted one, strong in thy mind and thy fiery will,
thou wilt conquer thyself, thou wilt conquer others;
thy glory will spread out in all directions beyond the Arctic Ocean;
and England will put thee to the test and prove thee to be native-born Achilles.
Do thou but go forward boldly and without hesitation.
Mars will obey thee, Hermes will be thy messenger,
Pallas striking her shield with her spear shaft will attend thee,
thine own breast and courageous heart will instruct thee.
For long time past Phoebus Apollo has cultivated thy mind in the arts.
English poetical measures have been sung by thee long enough.
Let that Courtly Epistle 1 —
more polished even than the writings of Castiglione himself —
witness how greatly thou dost excel in letters.
I have seen many Latin verses of thine, yea,
even more English verses are extant;
thou hast drunk deep draughts not only of the Muses of France and Italy,
but hast learned the manners of many men, and the arts of foreign countries.
It was not for nothing that Sturmius , 2 himself was visited by thee;
neither in France, Italy, nor Germany are any such cultivated and polished men.
O thou hero worthy of renown, throw away the insignificant pen, throw away bloodless books,
and writings that serve no useful purpose; now must the sword be brought into play,
now is the time for thee to sharpen the spear and to handle great engines of war.
On all sides men are talking of camps and of deadly weapons; war and the Furies are everywhere,
and Bellona reigns supreme.

Now may all martial influences support thy eager mind, driving out the cares of Peace.
Pull Hannibal up short at the gates of Britain. Defended though he be by a mighty host,
let Don John of Austria come on only to be driven home again. Fate is unknown to man,
nor are the counsels of the Thunderer fully determined.
And what if suddenly a most powerful enemy should invade our borders?
If the Turk should be arming his savage hosts against us?
What though the terrible war trumpet is even now sounding its blast?
Thou wilt see it all; even at this very moment thou art fiercely longing for the fray.
I feel it. Our whole country knows it.

In thy breast is noble blood, Courage animates thy brow, Mars lives in thy tongue,
Minerva strengthen thy right hand, Bellona reigns in thy body, within thee burns the fire of Mars.
Thine eyes flash fire, thy countenance shakes a spear;
who would not swear that Achilles had come to life again?

By 1580, Harvey had secured the patronage of the Puritan Dudley/Sidney faction and endorsed the new poetic dicta of Sidney and Spenser. Harvey’s vitriolic pen now turned against his former benefactor, expressed in the following poem (letter to Spenser and published by him), which Harvey had not meant for circulation. (Three propoer and familiar letters, 1580) 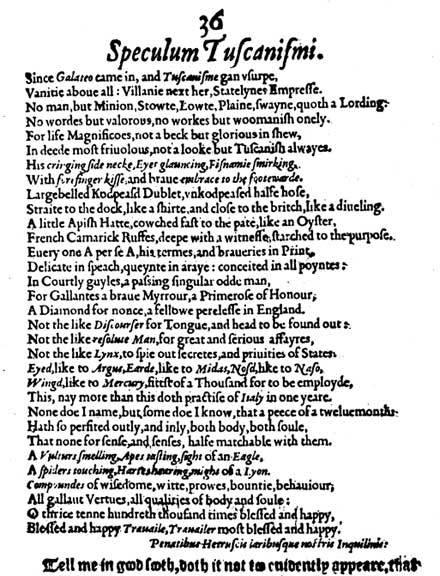 A comparison of the two pieces indicates that Harvey’s venom was much more potent than his honey. This insult to a man of Oxford’s standing was not to be tolerated by the establishment, and Lyly launched an attack on Harvey, finally forcing from him an apology.

Harvey’s career was later ruined by increasingly intemperate quarrels, opposed equally ferociously by the gifted Thomas Nashe. Lady Pembroke withdrew her protection from Harvey; and in 1599 Archbishop Whitgift and Bishop Bancroft ordered an immediate calling-in of various apparently objectionable publications, including an instruction that “all NASSHES and DOCTOR HARVEYES bookes bee taken wheresoeer they maye be found and that none of theire bookes bee euer printed hereafter.” John Davies of Hereford summed up the quarrel: “Well, God forgive them both, they did me wrong, / To make me beare their choller spude, so long.” 3

Naso: Ovid, author of the #Metamorphoses. Cf. Harvey Speculum. Harvey apparently means that Oxford has a rather large, Roman nose, believed in those days to indicate a lascivious nature..

1. Bartholomew Clerke’s Courtier, published with the patronage of Oxford, containing Oxford’s “Letter to the Reader” written in Latin.

2. In 1575 during his European travels Oxford made a special trip to Germany to visit the noted scholar Johannes Sturm. Speaking together in Latin, the two must have gotten along well, for Sturmius later wrote to Queen Elizabeth, urging intervention in the Spanish campaign against the low countries, and suggesting as military commander “some faithful and zealous personage such as the Earl of Oxford, the Earl of Leicester, or Philip Sidney.” [Ogburn, p. 682]

Gabriel Harvey (c1545 -1630), was a few years older than Oxford. Harvey spent most of his life in shire Essex, and must have been keenly aware of the Vere legacy. As an elder student at Cambridge, Harvey clearly felt an intellectual superiority to Edward de Vere (at first), though gradually succumbing to the force and fury of the younger man’s poetry, prose, and drama. No wonder he told Oxford in 1578 to put down his pen and pick up a weapon (and go die in a foreign war like a good nobleman and fightin’ Vere.)

I want to share with you all something interesting of which you may be unaware.

There is only one contemporary ‘llustration’ of Gabriel Harvey — though it’s just a woodcut image of a “generic” man, probably cut out from a larger block. But it appeared in Nashe’s caustic Have with you to Saffron-walden. Or, Gabriell Harveys hunt is up, 1596. In which Nashe claims to have created the illustration himself (doubtful in extremis) to illustrate Harvey on his way to the Ajax (an outhouse or indoor WC). What is equally fascinating is that Nashe had the printer (Danter) set up the page so that the toilet-attack on Harvey follows immediately Nashe’s statement that Harvey had abused the Earl of Oxford! It’s an amazing visual juxtaposition. 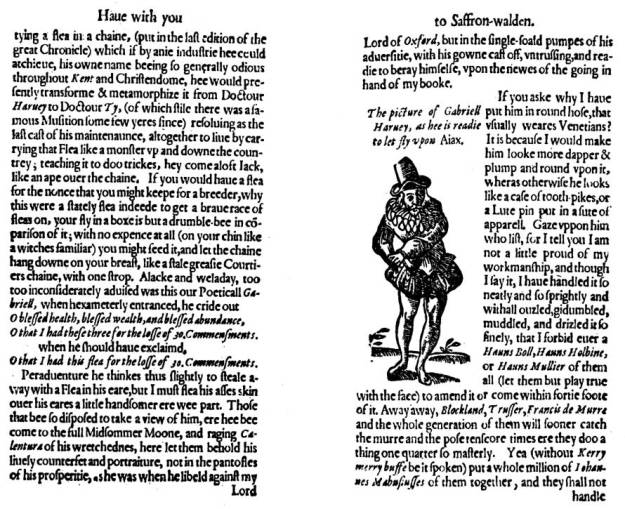 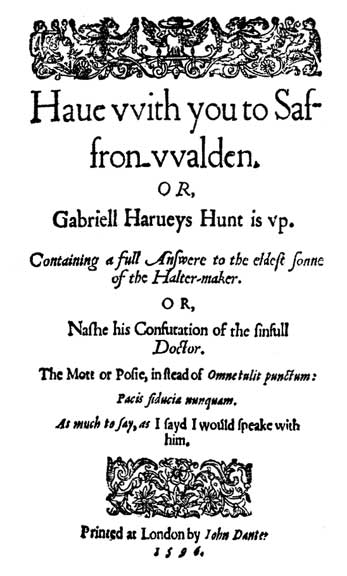 Harington’s Metamorphosis of Ajax (a jakes) appeared to great controversy in 1596. The Nashe book and illustration followed. Interestingly, “Shakespeare” makes an Ajax / Jakes joke in Love’s Labors Lost, printed 1598, which also may contain further send-ups of Harvey. The 1598 LLL says that it is an improved edition. Thus, there may have been a (lost) 1st book of LLL in 1596 or 1597.