References — Three asterisks (***) indicate references I have yet to verify, complete, or check for consistency.

[Forms of the name “William Shakspere” or “William Shakespeare” always appear in bold. Only authorship-related items are numbered. Items in brackets refer the reader to the date the document was actually created. Documents that refer back to earlier documents no longer extant give the earlier date in parentheses. When the date is uncertain but spans a number of years, the item is listed under the earliest date. Dating issues are discussed with each item. In many cases, purely legal Latin texts and mundane business transactions are not quoted in full. Only the first issuance of a Quarto is noted. For a complete list, see Quartos.]

1. 1593 Apr 18 (registered) Q1 Venus and Adonis. The only known copy is in the Bodleian Library. (Register at Stationer’s Hall) From the dedication, the first literary appearance of the poet “William Shakespeare.”

TO THE RIGHT HONORABLE
Henrie VVriothesley, Earle of Southampton,
and Baron of Titchfield.

Right Honourable, I know not how I shall offend in
dedicating my vnpolisht lines to your Lordship, nor
how the worlde vvill censure mee for choosing so
strong a proppe to support so vveake a burthen,
onelye if your Honour seeme but pleased, I ac-
count my selfe highly praised, and vowe to take aduantage of all
idle houres, till I haue honoured you vvith some grauer labour. But
if the first heire of my inuention proue deformed, I shall be sorie it
had so noble a god-father : and neuer after eare so barren a land,
for feare it yeeld me still so bad a haruest, I leaue it to your honou-
rable suruey, and your Honor to your hearts content, vvhich I wish
may alvvaies ansvvere your ovvne vvish, and the vvorlds hope-
full expectation.

Your Honors in all dutie,

2. 1593 Jun 12 Entry in account book of Richard Stonley (one of four tellers of the Exchequer), for his purchase of Venus and Adonis and Survey of France. There is no indication he knew the poet.

For the survay of Fraunce, with the Venus and Athonay pr Shakspere, xii.d. 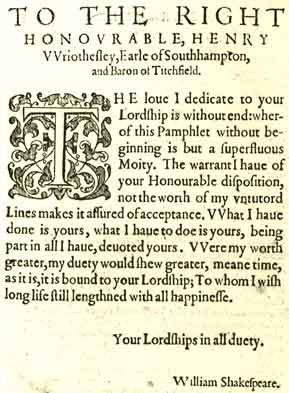 TO THE RIGHT
HONOVRABLE, HENRY
VVriothesley, Earle of Southhampton
and Baron of Titchfield.

The Loue I dedicate to your
Lordship is without end:wher-
of this Pamphlet without be-
ginning is but a superfluous
Moity. The warrant I haue of
your Honourable disposition,
not the worth of my vntutord

Lines makes it assured of acceptance. VVhat I haue
done is yours, what I haue to doe is yours, being
part in all I haue, deuoted yours. VVere my worth
greater, my duety would shew greater, meane time,
as it is, it is bound to your Lordship; To whom I wish
long life still lengthned with all happinesse.

Your Lordships in all duety.

4. 1594 Sep 3 (registered) Prefatory poem to the anonymous Willobie His Avisa. Or The true Picture of a modest Maid, and of a chast and constant wife. (Register at Stationer’s Hall) There is no evidence that the author knew the poet beyond the name, unless the hyphenation signifies knowledge that the name has been invented.

In Lavine Land though Livie bost
There hath beene seene a Constant dame:
Though Rome lament that she have lost
The Gareland of her rarest fame,
Yet now we see, that here is found,
As great a Faith in English Ground.

Though Collatine have deerely bought,
To high renowne, a lasting life,
And found, that most in vaine have fought,
To have a Faire and Constant wife,
Yet Tarquyne pluckt his glistering grape,
And Shake-speare, paints poore Lucrece rape.

5. 1595 Printed marginal note in an epistle by William Covell appended to Polimanteia, or the meanes lawfull and unlawfull to judge of the fall of a Commonwealth, against the frivolous and foolish conjectures of this age. The author is eulogizing the poets of England as superior to those of foreign nations. The marginal notes appear to be illustrative examples in support of the main text. There is no evidence that the author knew the poet beyond the name. (Text is shown in proportion to the marginal note.)

To William Kempe, William Shakespeare & Richard Burbage, servaunts to the Lord Chamberleyne, upon the Councelle’s warrant dated at Whitehall xv. to Marcij 1594, for twoe severall comedies or enterludes shewed by them before her majestie in Christmas tyme laste part viz St. Stephens daye and Innocents daye xiijli vjss vijd, and by way of her majesties Reward vjli iiijd, in all xxli.

1596 Oct 20 Two rough drafts of a document granting a Coat of Arms. (College of Arms, Vincent MS, Article 23). The original application by John Shakespere was in 1568. Schoenbaum speculates that William renewed the application in his father’s name. The shield and crest from the earlier document has the motto “Non, Sanz Droict”; that is, “No, Without Right”. Oddly, the “motto” (or an endorsement of heraldic correctness?) has been written twice, each time including a comma after “Non.” (One has been lined out with the “correction”(?) above with initial caps.) The phrase appears without the comma nearby. Without the comma, it would read: “Not Without Right”. (EKC II, 18-20; SS 166-171, with facs.)

7. 1596 Nov 29 Michaelmas Term Court order containing “petitions for sureties of the peace” entries. (The rolls of the Court of the Queen’s Bench, Public Records Office, London.) Schoenbaum states: “To obtain such a writ, the complainant swore before a Judge of Queen’s Bench that he stood in danger of death, or bodily hurt, from a certain party.” The link to Shakspere/Shakespeare seems to be the mention of Langley, a money-broker who had built the Swan playhouse in Paris Garden. Translated from Latin:

England. Be it known that William Shakspere, Francis Langley, Dorothy Soer wife of John Soer, and Anne Lee, for fear of death [ob metum mortis] and so forth. Writ of Attachment issued and directed to the Sheriff of Surrey, returnable the eighteenth of St. Martin.

The only certain documentary biography up to this point in the chronology:

William Shakspere lived in Stratford, his father’s name was John, and he was married to Anne Hathway. A family coat of arms was granted to John Shakspeare in October 1596.

William Shakespeare the poet wrote Venus and Adonis and Lucrece and dedicated both to the Earl of Southampton. He was recognized by two literary individuals as the fine poet of Lucrece.

The Actor was paid for performing comedies and interludes with fellow actors William Kempe and Richard Burbage as one of the Lord Chamberleyne’s Men. He was also named in a lawsuit as one who was a mortal threat to the complainant.

If you see any need for updates, please email me at: